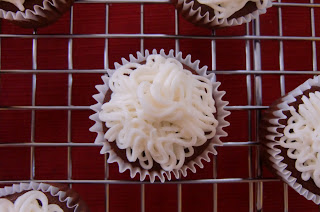 In honor of the Super Bowl and not having orders for this weekend, I wanted to try out something different.  I came across recipes for beer cupcakes and thought I should give it a shot.  I love thick chocolate stouts, and cocoa would be perfect with the nice richness of Guinness (one of my faves!).  I checked out a bunch of recipes and mixed and matched some ingredients and amounts (i.e., more Guinness, less milk) and upon tasting the cake batter (yeah, yeah, I know… raw eggs… salmonella… whatever.  I do this every time and I haven’t been hospitalized… yet) I felt like it needed more sugar. 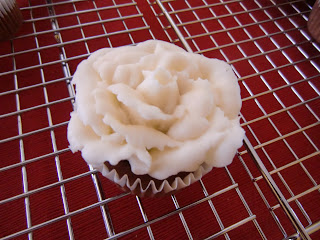 I don’t usually use the full amount of sugar suggested in recipes, but I guess the bitterness of the beer and the tartness of the sour cream called for more sweet stuff.  The cupcakes baked 10 minutes faster than stated in the recipe and I broke one open to see how it came out.  The texture was just a little bit denser than my regular cakes, and the taste was pretty interesting.  I could still smell the scent of Guinness and Vin said it tasted creamy.  The addition of the Bailey’s frosting pulled it together really well! 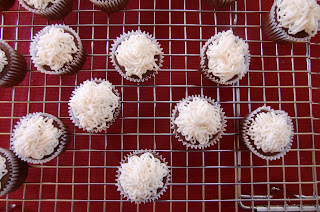 Over the holidays I raided my mom’s cake decorating tool set (muahahahaaaa).  I took some unique cake tips that definitely are no longer sold at Michael’s, and one of them was this neat little metal tip that made the frosting look like thin noodles.  These squiggles, or “ramen” according to Vin, looked fun on the mini cupcakes.  Perfect, uniform designs are so time-consuming,  and it was nice to be able to just play around with the icing and be messy  =) 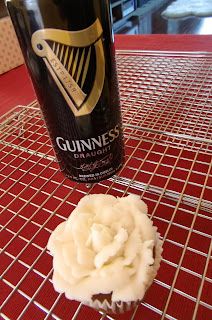 I also took a HUGE flower tip from my mom’s cake set and piped a big Bailey’s frosting rose on a regular cupcake for the hell of it.  I didn’t have the patience to put pretty roses on the rest of the cupcakes, so I just used a star tip on the remaining 29 cakes.