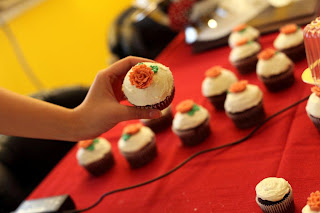 I must have not been thinking straight last week because I took on a double order for Saturday.  During one of the most insane work weeks ever. While practically OD’ing on precautionary vitamins and supplements and

even when I had the slightest tickle in my throat because I was surrounded by sniffling and sneezing and coughing people.  I had absolutely nooooo time to be sick!  Four dozen cupcakes had to be baked and decorated by noon on Saturday. And I had to be able to focus on work!  And I had to clean the house!  Over ambitious, much?  haha

I was planning to deliver these in my cupcake carriers and be a pain and make people take their naked cupcakes (I didn’t have wrappers that fit mini cupcakes!) out of the carrier case so I could bring it back home with me right then and there.  On Thursday I was thinking to myself, “thank goodness I have TWO of these carriers!” but I got lucky.  REAL lucky.  Like Clint Eastwood asking if I felt lucky except I’m not a homicidal maniac thief with a death wish. Anyway, the cake boxes and cupcake clamshells and wrappers and bags I ordered were delivered!  Therefore, I could be somewhat professional and package these babies proper for my orders! I put “The Cake Dealer” stickers on the cupcake boxes for the perfect finishing touch! Yay for basement storage!

I made white and pink vanilla frosting on Thursday night and baked super light and moist chocolate cupcakes on Friday night.  60 regular cupcakes and 24 mini cupcakes, to be exact.  I actually had half a bite of a mini cupcake and made Vin eat the other half since my tastebuds were off from snorting ingesting all the confectioner’s sugar and flour that flew out of the mixer.  He said it tasted awesome; since the man doesn’t love chocolate (let alone most desserts), I figured they really did come out well! 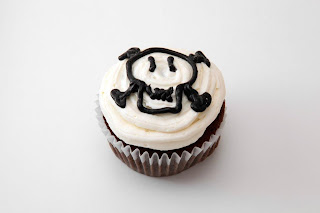 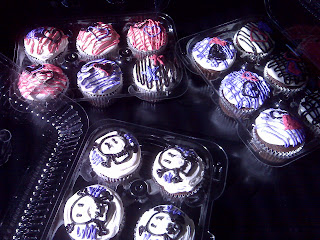 Two dozen regular cupcakes were for a family friend’s niece’s party.  The birthday girl sounded like a wicked cool kid because she wanted skulls and punk designs. Hello? Just what I like, too!  So I did some freehand piping of skulls on 1 dozen and some girly/punkish designs on the other dozen.  I was told that the girls loved the cupcakes and I now am booked through November 13 because of this order.  haha 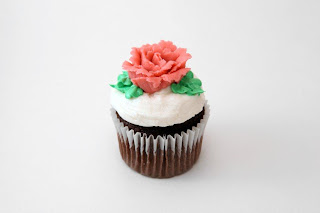 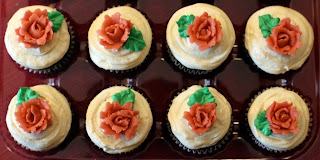 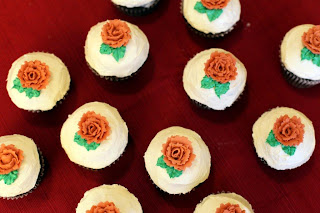 The other order was for a dozen regular cupcakes and a dozen mini cupcakes with roses for another girl’s birthday party.  I finally got the frosting consistency to be perfect and not melty @ all, but I should have started making the roses a day in advance because my wrist and forearm got really fricking tired churning out 24 frosting flowers all @ once.  I mean, it was so stiff it was hard to squeeze!  (Yes, I did purposely set myself up there  haha)  But, I gotta say, they came out looking pretty good! And I was so glad the girl’s mom said the girls went crazy over them and thought they were so beautiful and delicious.  Awww… my temporary wrist pain was totally worth it.  =) 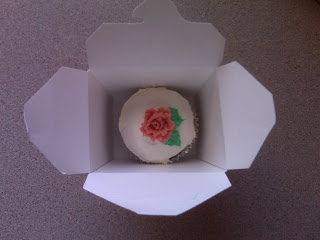 My final frosting-related feat of the day was making one last rose for a birthday cupcake for a friend.  I received the rest of my packaging order after dropping off the other 2 orders so the signature hot pink/black/white ribbon was missing (dang!).  But not for Jaime’s birthday cupcake!  I carefully placed it in one of the 200 Chinese food takeout containers I just received and finished it with a bow.  Voila! C’est parfait! 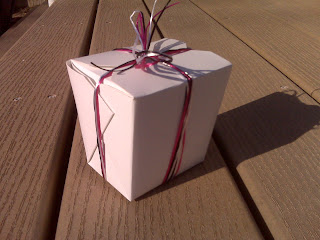 Happy birthday to all you October babies!