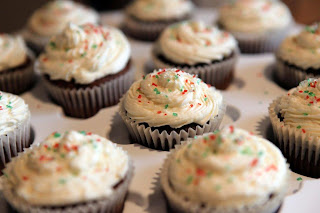 Thank goodness Christmas is done and over with!  I was on a baking binge for the past week.  I just couldn’t stop making SOMETHING and I made almost one item a day.  Insane!  I feel like confectioner’s sugar, flour, and butter are seeping out of my pores.  I think I need to detox now. 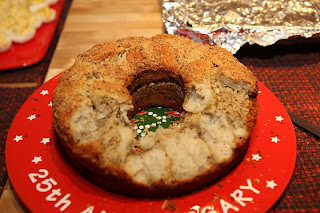 For Christmas eve dinner @ the T house I made another Bundt loaf of savory monkey bread.  Personally, I think it came out better for Thanksgiving because I used more butter.  Seriously, what was I thinking trying to cut down on the butter for Christmas?  It was still good.  There was about half the loaf left by the time the 14 of us were done eating.  Vin and I packed up some leftovers but left the bread for Mom T.  I can easily make some @ home for us (more on this below) and she loved it the most, so it’s the least I could do  =) 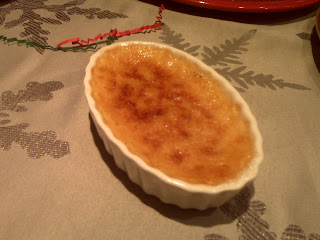 I brought over the eggnog crème brûlées for Christmas eve dessert and they were a hit. Vin helped me torch the sugar just before serving and went around telling everyone to eat them and basically shoved the ramekins in their faces.  (Aww… my #1 fan  <3)  I introduced one of my brothers-in-law to it since he had never had crème brûlée before, and another one was raving about it all night (then again, he and Vin had a lot of scotch so it could have been the liquor talking  hahaha). I didn’t try any during Christmas eve, but today I had a little bit of the last ramekin we saved.  The custard consistency was perfect and the flavor of my improvised eggnog was on the money.  It was so money it was like Guy Fieri and his permanent sunglasses tan.  Now, what other flavors can I infuse into the next batch of crème brûlée… HHHMMMmmmm… 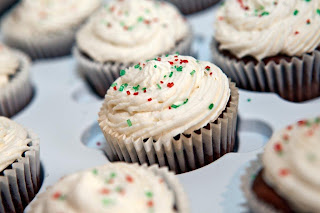 So I lied and broke out mixer again before New Year’s.  Poor baby.  The little monster probably thinks I hate it because I’m so abusive.  Whatever.  It’s still protected by the warranty and I needed to make frosting.  I still had plenty of leftover chocolate cupcakes and we were going to make rounds to see other family, so I decided to whip up frosting and quickly ice two dozen cupcakes and a dozen minis.  I have a tendency to rummage and be impulsive, so on a whim, I made Bailey’s mint-flavored frosting.  Yes, you read that correctly: Bailey’s.  With mint.  And it was delicious!  I swirled it on the cupcakes and sprinkled some red/green/white sugar on top and voila!  Instant awesome desserts.  We brought a dozen to each of Vin’s sisters’ houses.  I have to say, I always like watching everyone’s reactions when they eat my baked goods because I always worry it doesn’t come out well or they don’t like it, so when people say, “This is the best chocolate cupcake I’ve ever had!” or “The frosting is perfect!” or “Oh my God I’m soooo full but I ate the whole thing it was so good!”… I just love it!  It’s all I need.  As long as I have fans who like eating my baked goods, I’ll keep having fun  =) 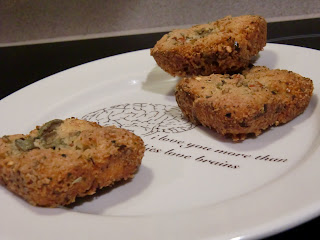 Today is the day after Christmas and it’s been snowing alllll day.  It’s coming down hard and it’s so windy the house is creaking… like there’s someone walking around in the attic *shudder!*  We had the fire going today, and I made more savory monkey bread just for the two of us.  This time, I added crushed red pepper for some kick and Vin chopped up some green olives and pimentos to incorporate in the bread.  And I used smaller square pans.  And more butter =P  They came out flawless this time.  There’s a wonderful crust along the edges but a fantastic chewiness inside and the flavor of the olives just takes it to another level.  I wasn’t intending on baking today, but it was nice to have the oven on the warm the house.  Or… smoke up the house because the butter bubbled over and burned in the bottom of the oven, which made smoke come out and the detector to go off and Vin laugh @ me and ask, “What is going on in there?”  hahaha  Oooops.  Either way, the kitchen smells awesome.

Right now Vin is playing with his Christmas present.  Let’s hope it doesn’t fritz out on him or I’d be pissed.  And I don’t even know where to start with mine.  It’s a crazy awesome machine that’s “1) a very mysterious and powerful device and 2) its mystery is only exceeded by its power”. (Ten points if you know where that’s from. Hint: it’s my favorite movie.)  I think I’m going to let it sit in the box for a while (you can even see it on the left in the pic of our living room) and let the idea of my owning a crazy Cricut Cake machine fester.  I don’t even know where to start with this.  It’s like… if I take it out, it’ll force me to go to the next step: using fondant.  That’s unknown territory I’m not quite ready for yet…