This past weekend we went upstate to celebrate an early Thanksgiving with my extended family and Katie and her cute babies (traveling next weekend would have been hellish so the off-holiday party was a brilliant idea).  My little brother (I made a Pikachu cake for his graduation) is obsessed with pie for some reason, so I suggested that we make our pineapple coconut pie (aka “PCP”) for dessert and he was psyched.  We made this for Easter after finding a recipe for pineapple pie and completely tweaked it to include condensed milk and coconut and made fresh whipped cream for topping =)  My bro and I made two pies (somehow I ended up doing most of the work while he was scraping for the last remnants of the sweetened condensed milk can), but unfortunately no pics were taken before the first one was devoured and I can guarantee by now that between my dad and my brother, the second pie is long gone.  haha  Oh well.  I’ll have to make it again @ some point. 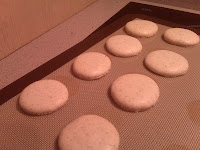 A macaron is awesome because it’s really light and yet part of it is a bit like a chewy cookie with filling.  I love meringues, and the consistency of a macaron is just fun to eat.  I like them, but they’re not my favorite dessert.  My husband, on the other hand, seems to have fallen in love.  Vin has been very subtly hinting that I make macarons ever since I brought him a sampling from Macaron Cafe.  (His clues ranged from “I found all these websites that have macaron recipes and just emailed you”… “Where do we get almond flour… does Stop n Shop have it? What about Michael’s? Are you sure? I bet you didn’t even look!” … “You know you have to let the egg whites sit for a while in the fridge”… to blatantly telling me, his family and my family: “Screw cupcakes… you should just make macarons!” haha)  I WAS interested in trying my hand at it, so I bought a coffee/spice grinder to make almond “flour” and separated and whisked eggs and took out the sil-pats.  It was kind of silly of me to decide to do this @ 11 pm on a Monday night, but I just didn’t want to watch TV or go to bed just yet (again, my reasoning of making a bigger mess instead seemed completely logical @ the time) and made 4 trays of macarons. 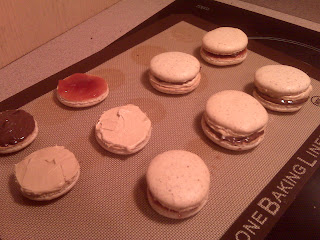 This experiment was very Goldilocks-like to say the least.  The recipe said to put them in the oven for 10 minutes @ 325. Knowing my temperamental inferno of an oven tends to run hot, I set it closer to 300.  Somehow, I was able to burn the bottoms yet not fully cook them.  There goes one batch.  The second set was in for less time @ the same temp and came out better but not so great, and the third and fourth batches were more acceptable @ lower heat and less time.  I took a small bite of one and I THINK it kind of tasted like the macarons I bought?  I needed a second opinion, and unfortunately my taste tester was already fast asleep. I whipped up some peanut butter frosting and slathered it on half the edible macarons, and alternated with

and strawberry jam for the other halves.  I packed a container for Vin’s snack tomorrow and hopefully he’ll enjoy the objects of his obsession  =P

Eventually I’ll have to make another attempt @ this and try to make different flavors.  Goldilocks, out.

Update 11/23: Vin had a couple macarons this morning and said, “they were delicious baby!!” and “the texture was perfect.”  He brought some into work and his co-workers (I was told some of them are French) said they loved them and said, “Wow, she did well for her first time!”  To which I thought “TWSS and merci”  =)