Bread and brownies for Thanksgiving

I was having trouble deciding what to bring for Thanksgiving @ my in-laws’; there were just too many tasty things I wanted to make and it was tough to narrow it down to one item.  I couldn’t choose between making an appetizer/side dish or a dessert so on Wednesday morning (just before Vin’s nephew #3 was born!) I opted to make both: a savory monkey bread to go with the meal and brownies with salted caramel frosting topped with chopped bacon and pecans.  Yes, I said “bacon” and “brownies” in the same dessert.  If you really think about it, it is the perfect “crave satisfying” food: salty, crunchy, chewy, sweet, or as one of my aunts says, the bacon caramel brownies make up “three of my favorite food groups!” 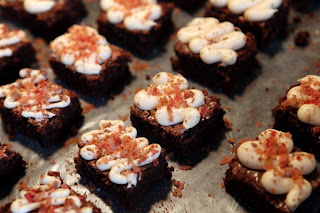 I hit up Stop & Shop to get some last minute ingredients for my baking creations and I didn’t start prepping till 10 pm.  Yes, it’s becoming a bad habit this late night baking thing… but the macarons were a spur-of-the-moment/late night idea and they turned out wonderfully so I was kind of hoping my last-minute preparation of contributions for the big family dinner would come out well, too.  I made the brownies first, and while they were in the oven I dumped a ton of sugar and butter into a pot on the stove for the caramel.  This would take a while to heat up, so I chopped up some pecans and minced slices of cooked bacon into itsy bitsy little pieces and popped them in the toaster oven for a bit, just to bring out the crunchy goodness.  After the caramel cooled, I whipped in some cream and I have to say, this is one of my favorite frostings.  It was super light and fluffy and was JUST right with the sweet, chewy chocolate from the brownie, the solid crunchiness from the nuts, the all-around perfection of bacon, and a light dusting of sea salt and cocoa powder.  I know… bacon + anything is getting played out and everyone and their mom knows it from watching any food show or scanning the menus of hot, trendy restaurants, but 1) I love bacon; 2) I’m making this dessert so I can do it any way I please; and 3) the family really liked them.  I get that the combination of flavors would be an unusual and new concept for some, so for those that wanted to play it safe, I left out the bacon sprinkles on some of the pieces.  *sigh*  Oh well, more bacon for me! 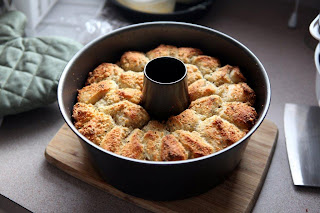 Yeah, so the brownies were good, but the bread was the star of the show.  You may be familiar with monkey bread as more of a dessert item with brown sugar and honey and nuts… but this was a savory monkey bread with spices, grated cheese and a Paula Deen-approved amount of butter for added deliciousness.  I made this on Thanksgiving morning because I still wanted it to be warm when we brought it to Vin’s parents’.  We left it in the car for a bit while we met his sister’s new baby @ the hospital (he’s sooooo cute!) and the entire car smelled awesome when we came back.  Seriously, we were drooling the whole ride to the T house and couldn’t wait to break into the bread.  If I could patent that smell into an air freshener I totally would.  You’d be ruined if you were on the Atkins or some carb-counting diet and got a whiff of this, for sure.  hahaha

And it tasted as good as it looked. After flipping it onto a large plate, Vin and his parents and I ripped off pieces and tried it, and we couldn’t stop eating it.  It was simple to make and it was such a huge hit!  By the end of the evening, there was just one little piece left, and mind you I used THREE pounds of dough for this bread.  I’m most definitely making this again for Christmas Eve, if not sooner  =)